This award was established to honor the most outstanding Proffered Paper of the SMRT 26th Annual Meeting. The recipient of this year’s award,

will be presenting his award-winning paper Saturday, 21 April at 12:55.
Short T2 Nerve Imaging using Vascular and Background Tissue Suppression in the Brachial Plexus at 3T 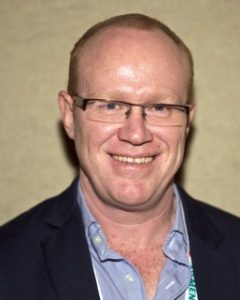 Ben Kennedy is the Chief MRI Technologist at Qscan Radiology Clinics in Brisbane Australia and has a Masters Degree in Magnetic Resonance Technology from the University of Queensland Center for Advanced Imaging. From early in his initial training in MRI, Ben was conscious of the importance of MRI education, being engaged in the wider MRI community, and contributing to those who follow the same path. Whilst formal post graduate education is an important component to improving his knowledge, high quality mentorship early in his career had a very positive influence on the culture he follows today in mentorship of his staff. Fostering the same passion for excellence and knowledge is paramount in creating self-motivation in the optimum learning environment.

After attending his first international SMRT and ISMRM meeting in Seattle in 2006, Ben was inspired to work with SMRT Past President Wendy Strugnell and Dominic Kennedy to establish an Executive Committee of the ANZ Chapter and deliver the first Annual SMRT ANZ Chapter meeting. Over the last 10 years this meeting has promoted over 20% growth in global SMRT membership and created long term commercial support to ensure the delivery of world class MR educational opportunities to this large geographical region. Creating opportunities for ANZ members, mentoring them into ANZ Chapter leadership positions and continuing to support this chapter along its path has been both professionally and personally rewarding.

Ben was elected to the SMRT Policy Board in 2008 where his first role was Program Chair for the 2009 Annual SMRT Meeting held in Hawaii. He has held positions of Executive Member, Membership Chair and Treasurer. Ben was elected to be President of the SMRT from 2012-2013 where his focus was the evolving face of education to online content and interactive social media outlets. This supported further engagement of the MR community in evolving technology, promoting membership growth. It also involved partnering with commercial vendors to create future collaborative meetings.

Ben maintains a strong interest in the educational pursuits of the SMRT, serving on the Education Committee and many past Program Committees since 2008. He is currently serving on the inaugural joint Safety Committee of the ISMRM and SMRT and is a member of the East Asian ISMRM List serve.

Through his extended professional community Ben has been invited to assist development in new MRI installs through South East Asia helping to develop protocols and mentor local MRI technologists in sequence writing and optimization. He has an active role in MR education giving many presentations to local Referring Specialist Doctors, General Practitioners and Physiotherapy groups. He is also on the MRI Safety Advisory Committee for the Royal Australian and New Zealand College of Radiologists revising the latest RANZCR MRI Safety Guidelines White Paper. Ben recently created a Facebook Group for Philips MRI Community and continues to reach out to his global network of colleagues to create further networks sharing MR educational content.

Ben’s roles also include MRI research and he is involved in multiple programs affiliated through both University of Queensland and Griffith University CMR. He currently participates in clinical science agreements in sequence and coil development with Philips BU.