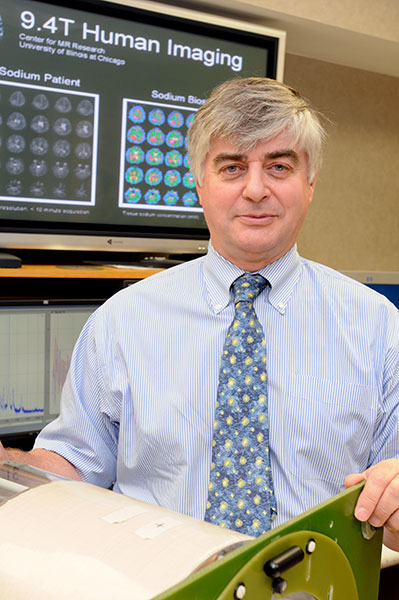 Keith Thulborn, MD, PhD, Professor of Radiology, Physiology & Biophysics at the University of Illinois, USA, completed his PhD in Biochemistry (1979) at the University of Melbourne, Australia, and moved to Oxford University, England, for two years on a postdoctoral CSIRO scholarship to learn in vivo NMR spectroscopy under Sir George K. Radda in the Biochemistry Department. He continued his formal education at Washington University School of Medicine in St Louis, USA, where he earned his MD degree (1984) while continuing research in quantitative NMR with Joseph H. Ackerman. He interned at Boston Childrenʼs Hospital (1984-1985) and completed residency (1989) and neuroradiology fellowship (1990) at Massachusetts General Hospital, Boston, advancing to Associate Professor of Radiology at Harvard Medical School. He left Boston to establish the Center for Magnetic Resonance Research at University of Pittsburgh Medical Center, building the first clinically based 3 Tesla MRI scanner for human neuro-imaging. He organized two clinical trials that demonstrated the clinical efficacy of 3T MRI in the human brain. The outcome was the first clinical FDA cleared 3T scanner from GE Medical Systems, USA. He left as full Professor in 2000 to build the first 9.4 Tesla MRI scanner for human brain Xn-nuclei metabolic imaging at the University of Illinois at Chicago where he remains as a clinical neuroradiologist while fulfilling his role as CEO of his own company that promotes clinical fMRI. He continues to publish papers on 1H, 31P, 23Na, 17O and 39K MRI in human brain at ultra-high field. He has promoted 1H fMRI and 23Na MRI in Australia at 3T with collaborations at Royal Melbourne Hospital, Melbourne and Westmead Hospital, Sydney.