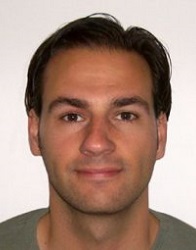 Alexander Leemans is a physicist who received his Ph.D. in 2006 at the University of Antwerp, Belgium. From 2007 to 2009, he worked as a postdoctoral researcher at the Cardiff University Brain Research Imaging Center (CUBRIC), Cardiff University, Wales, United Kingdom. In 2009, he joined the Image Sciences Institute (ISI), University Medical Center Utrecht, the Netherlands, where he currently holds a tenured faculty position as Associate Professor. His current research focuses on processing, analyzing, and visualizing diffusion MRI data for investigating microstructural and architectural characteristics of tissue organization. He heads the PROVIDI Lab and is the developer of ExploreDTI, which is a graphical toolbox for investigating diffusion MRI data.